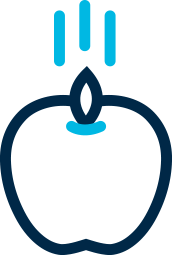 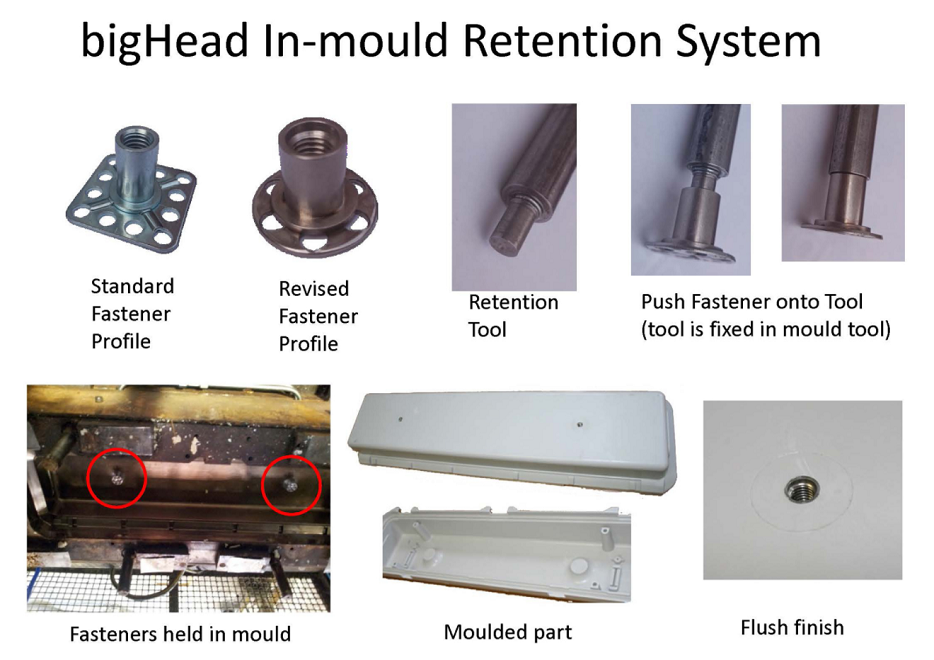 Moulded-in bigHead® fasteners improve functional performance and save production cost. When a leading industrial composite products manufacturer needed to improve the functional performance of their outdoor luminaires which are used on marine platforms and oil rigs, they turned to bigHead Bonding Fasteners for a solution and were rewarded with additional production cost savings.

A sheet moulded compound (SMC) housing forms the upper and supporting part of the IP-rated luminaire which is designed for top-access mounting. The original moulded component formed a sealed cover with two female threaded metal fastening inserts. By necessity, the inserts were fitted after the SMC moulding process, requiring a secondary operation for drilling holes and for bonding/sealing the inserts. As well as adding several minutes production time and requiring an extra person to carry out the work, the secondary operation also necessitated inspection of the sealing seat area – and significantly, the possibility of expensive product function failure in the field when, over time, the seal performance degraded and water ingress occurred.

The customer contacted bigHead when its design engineers began to investigate a solution to the functional performance problems and were very pleased to learn that this type of challenge is exactly what the Verwood-UK based manufacturer thrives upon. The solution was of course to embed bigHeads into the SMC material during the mould process with a completely sealed one-piece upper housing guaranteeing its resilience to water ingress for the long term.

On first investigation it was clear that a standard bigHead fastener might be difficult to directly set into the existing and costly SMC mould tool without significant tool rework. There was also a further challenge as to how the two bigHeads could be locked in position during the mould process but easily removed.

However, bigHead’s engineering team, with their knowledge of hundreds of applications gained over several decades, designed a bigHead to provide a secure fixing point that is fully embedded within the SMC material. As part of its engineering service bigHead also improved the production process by providing a retention tool that could be cost-effectively fitted into the existing mould tool. This retention tool precisely and securely holds the bigHeads in position during the SMC mould cycle, and allows straightforward component removal and reloading. And importantly, by removing the need for any secondary drilling and sealing operations, significant production time and cost savings were achieved.

As with many similar engineer-to engineer projects successfully carried out by bigHead, customer and supplier worked together through a rigorous development phase – where the fastener design and the mould retention tool were optimized, and the SMC housing fully test-house and field performance tested. Like all bigHead’s produced at its Verwood-UK factory, this customized bigHead is fully batch tested and documented as part of the manufacturer’s ISO 9001:2008 Quality Management System.

This website uses cookies to improve your experience while you navigate through the website. Out of these, the cookies that are categorized as necessary are stored on your browser as they are essential for the working of basic functionalities of the website. We also use third-party cookies that help us analyze and understand how you use this website. These cookies will be stored in your browser only with your consent. You also have the option to opt-out of these cookies. But opting out of some of these cookies may affect your browsing experience.
Necessary Always Enabled
Necessary cookies are absolutely essential for the website to function properly. This category only includes cookies that ensures basic functionalities and security features of the website. These cookies do not store any personal information.
Non-necessary
Any cookies that may not be particularly necessary for the website to function and is used specifically to collect user personal data via analytics, ads, other embedded contents are termed as non-necessary cookies. It is mandatory to procure user consent prior to running these cookies on your website.
SAVE & ACCEPT